Beachfront Property and The High Watermark 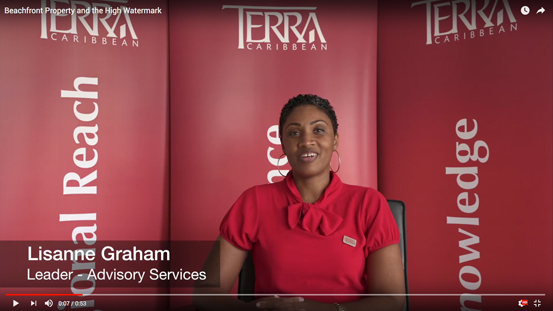 Beachfront land has always had great appeal to persons wanting to own a piece of paradise. In Barbados, beachfront development has ranged from as far north as Port St. Charles, all the way down to The Crane Private Residences in the South-East of the island. Over the years, the prices of these properties has increased as the available supply of beachfront land and villas declined. The coastline these properties sit on is also a key economic asset as a tourist attraction and an access point for fishing and maritime transport; these are among the many reasons it is a vital asset to protect.

The effect of climate change has resulted in increasing instances of beach erosion and cliff instability at various locations around the island. These issues, among others, have caused the need to implement policies that ensure sustainable coastline development for the future. As there are no private beaches in Barbados, properties which front onto a beach only own the land up to the high-water mark. This is the line of the highest run up of waves at the mean tide between spring[1] and neap[2] tides - a concept illustrated in Figure 1 below:

Measurements to determine the high-water mark are made at the time of any ordinary high tide occurring on the sixth, seventh or eighth days before or after the day of a full moon.[1]  Owners of beachfront property should be aware that the high-water mark can change over time, resulting in the ownership of either more or less land where there has been either beach accretion or erosion.

When it comes to coastal development, an assessment by the Coastal Zone Management Unit (CZMU) is required to confirm whether development is indeed possible. If so, buildings are generally required to be constructed with a set-back[2] of 30m (100 feet) from the high-water mark on a beach, or 10m (30 feet) for cliffs, measured from the landward point of cliff under cut[3]. It is possible, however, that exceptions to this rule may be approved by the Minister with responsibility

[3] This is the point where waves have eroded a cliff’s base forming an indentation referred to as a “wave cut notch”, causing instability in the cliff over time

[1] Spring tide occurs just after a new or full moon, when there is the greatest difference between high and low water.

[2] A neap tide occurs just after the first or third quarters of the moon when there is the least difference between high and low water.